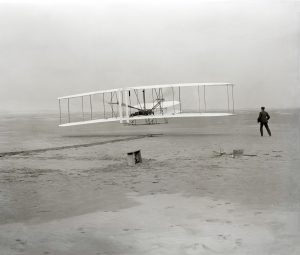 Manned powered flight was the stuff of myth and legend for hundreds of years.  The equations of flight were first formulated at the very end of the eighteenth century.  They did not offer much optimism since it appeared evident that, with the technology then available, it would not be possible to build an aircraft capable of carrying a pilot.  It was only the later development of light internal combustion engines that allowed a possible practical solution to be envisaged and even then difficulties of control would prove a considerable drawback and raise the danger level for the first aeronauts.  The talk will explain how the Wright Brothers eventually overcame all these obstacles and got safely airborne.