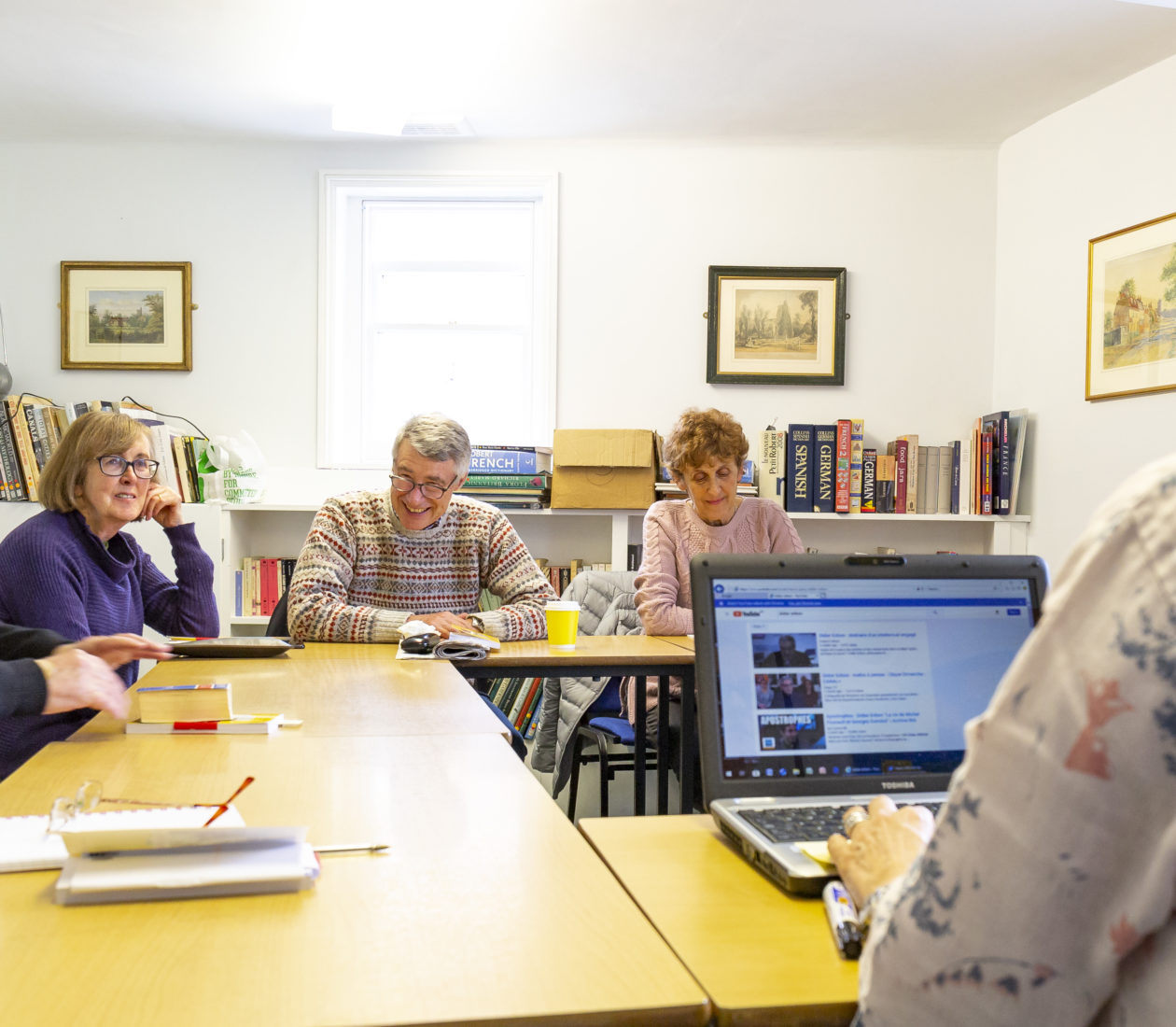 Mike Althorpe (The London Ambler) is an urban historian, architectural researcher, educator and story teller with a passion for the history, streets and buildings of London. Graduating from Kingston University with a BA in Fine Art, Mike went on to complete a research MA at the University of Westminster focussing on London’s Architecture, history and spatial development. He has spent the past 18 years producing a variety of built environment events, publications, exhibitions and outreach projects. Most recently he co-authored ‘Social Housing’, published by RIBA, and curated the exhibition of the same name in London in 2017 and at New York’s Center for Architecture in 2018.

Michael de Swiet is a retired professor of medicine and has been a garden fellow at the Royal College of Physicians (RCP) for seven years, sharing responsibility for the management of academic aspects of its medicinal plants garden. He also serves on the Advisory Committee of the Chelsea Physic Garden.

Esperanza Fernandez was born in Logrono (La Rioja) in Northern Spain, but settled in England at the age of 19. She has been teaching Spanish to adults since 1990 at Hendon and Barnet Colleges, Hampstead Garden Suburb Institute, Middlesex University, Knuston Hall, (a weekend residential college) and since 2006 has been teaching our popular Spanish classes at the HLSI.

Vicky Ford is an experienced Pilates teacher who trained with BodyControl Pilates in London. She has been teaching for 9 years, and before this trained as a professional dancer. She regularly attends new courses and workshops to keep up this high level of training.

Agnès Gatineau studied in Sorbonne Nouvelle, Paris then in University College London. She has taught French as a foreign language for over 20 years in a broad spectrum of institutions and businesses. She also runs her own workshops and cultural tours. She has been the HLSI popular French tutor for over 10 years.

Sue Gee is an award-winning novelist who has also won two London short-story competitions and had stories broadcast on Radio 4. Her collection Last Fling (2013) is published by Salt Publishing. Her most recent book is Just You and the Page: Encounters with twelve writers (Seren Books, 2021). She has taught creative writing for twenty-five years: at Middlesex University, where she ran the MA in Creative Writing from 2000-2008, at the Faber Academy since 2010, and for the Write to Life group at Freedom from Torture.

Darren Harper holds a BA (Hons) English & Creative Writing (1st class), a PGCE in Lifelong Learning, and has been an adult education teacher for 10 years.  In addition to the HLSI he also teaches at Higham Hall (Cumbria), Dillington House (Somerset), Knuston Hall (Northamptonshire) and Marlborough College (Wiltshire).  He offers study days at several independent libraries, including the Birmingham & Midland Institute and the Morrab Library in Penzance. Darren has almost completed his first book, Encounters and Reflections: An Introduction to Philosophy, which will be published in 2022.

Martin Kelly has a BA in Fine Art and a PGCE. He has taught art and design subjects and interior design since 2001 in a variety of adult education institutions, and was Head of GCE Art and Design from 2006-2011 at Worcester College of Technology. He has exhibited and sold artworks in Great Malvern, Pershore, Bath, Manchester, London and Sydney. He painted and built sets for theatres, photographers and trade shows in the 1980's in London and in the 1990s in Sydney.

Jim Lloyd Davies has been Chair of the Science Group at HLSI for the past three years.  He has academic qualifications from Cambridge and the Ecole Militaire.  He served thirty years with the RAF before becoming a tour guide specialising in London, Paris and military museums and battlefields.

Rachel Malik is a writer.  She has written for a wide variety of publications including, London Review of Books blog, New Left Review, Sight and Sound, Radical Philosophy, English Literary History and The Guardian. For many years she taught English Literature at Middlesex University, leaving to concentrate on writing fiction. Miss Boston and Miss Hargreaves is her first novel and was published by Penguin in 2017. The book was shortlisted for the Walter Scott Prize for Historical Fiction (2018) and won her a writing residency at Gladstone’s Library in Hawarden, Flintshire.  She is currently writing her second novel.  Her website is rachelmalik.com

Elena Malysheva graduated in Linguistics from the University of Pushkin, Russia, and later moved to London, where she obtained an MSc in Education from Birkbeck, University of London.  She has over 15 years of experience as a professional translator in the fields of creative media, art and literature and worked as a consultant for the BBC Radio 4 series on Vasily Grossman “Destiny of a Novel”.  She is currently teaching Russian language to native and non-native speakers, as well as history, culture and literature.

Misha Manoor is an experienced exercise instructor who has been in the fitness industry for almost 30 years. In addition to general exercise instruction she is qualified to teach exercise to older adults from GP referrals. She has been a popular HLSI fitness tutor since 2017.

Bettina Metcalfe is a dendrologist with a keen interest in observing and identifying trees in ornamental settings in historic parks and gardens. She is a professional teacher and has extensive experience of leading tree study walks. Bettina is an active member of the International Dendrology Society.

Vincent Milne has been teaching at HLSI for several years and also currently teaches art at Hampstead School of Art and Mary Ward Centre. He has a BA Hons in Fine Art Painting from Goldsmiths College and several postgraduate qualifications.

Jane O’Grady co-founded the London School of Philosophy, having previously lectured for Birkbeck’s Faculty of Continuing Education, and at City University London. She co-edited Blackwell’s Dictionary of Philosophical Quotations with A. J. Ayer, writes philosophers’ obituaries (the Guardian) and reviews for various papers and magazines, and has written Knowledge in a Nutshell: Enlightenment Philosophy (Arcturus 2019), 16 entries for the Oxford Companion to Philosophy, and introductions to works by J S Mill and Plato (Wordsworth).

Dr Mark Patton is a graduate of the Universities of Cambridge and London, and the author of several published works of historical non-fiction and fiction. He has taught at the Universities of Leiden, Paris, Wales, Greenwich, and Westminster, and currently teaches for The Open University. He has been teaching at HLSI since 2010.

Jenny Pedler from Footprints of London has lived locally for many years and has guided many of our walks.

Marie-Pierre Perez qualified at the Orléans University and The Sorbonne University in Paris. She has been teaching French in London for the past 15 years at several higher education institutions such as City University and Westminster University. She has also been providing language training at international companies. Marie-Pierre has a passion for theatre and has qualified at the Conservatoire d'Art Dramatique in Orléans. She has performed as leading actress and led many French drama workshops at French Institutes abroad in Germany, Lebanon, Morocco, Mexico and Switzerland.

Gloria Posner has a BA in Foreign Language and Literature (Bologna), a Certificate in Further Education and a PGCE. She has taught at various institutions including Hampstead Garden Suburb Institute for over 10 years. She has been teaching Italian at HLSI for the last three years and will be teaching Levels 1, 2 & 3.

Barbara Pöllet, born in Germany, has lived in England since 1996. She has a BSc in Anthropology and a Cambridge Certificate in Teaching German to Adults. She has taught German in a variety of institutions for more than 19 years, including City University and City Lit. She has been HLSI German tutor since 2017.

Isabel Raphael read Classics and English at Cambridge and has taught these subjects ever since. She currently teaches two adult Latin groups and one Greek, as well as delivering short courses and lectures on the Classics. She is a former President of HLSI.

Robbie Redway  has been teaching yoga for over three years now. He trained in both Hatha (slow and nurturing) and Ashtanga (strong and powerful) styles and has taught in multiple studios in his hometown of Margate and (since Covid) regularly teaches online in group and private settings.

Julian Williamson trained at the Trinity College of Music, London, after which his career has been as a freelance musician, largely split between work as a conductor and as a lecturer. He has directed concerts in all the major London Halls and has worked abroad on many occasions, including lecturing on opera in Verona. He has been HLSI’s very popular music tutor for some 25 years.

We use cookies on our website to give you the most relevant experience by remembering your preferences and repeat visits. By clicking “Accept All”, you consent to the use of ALL the cookies. However, you may visit "Cookie Settings" to provide a controlled consent.
Cookie SettingsAccept All
Manage consent