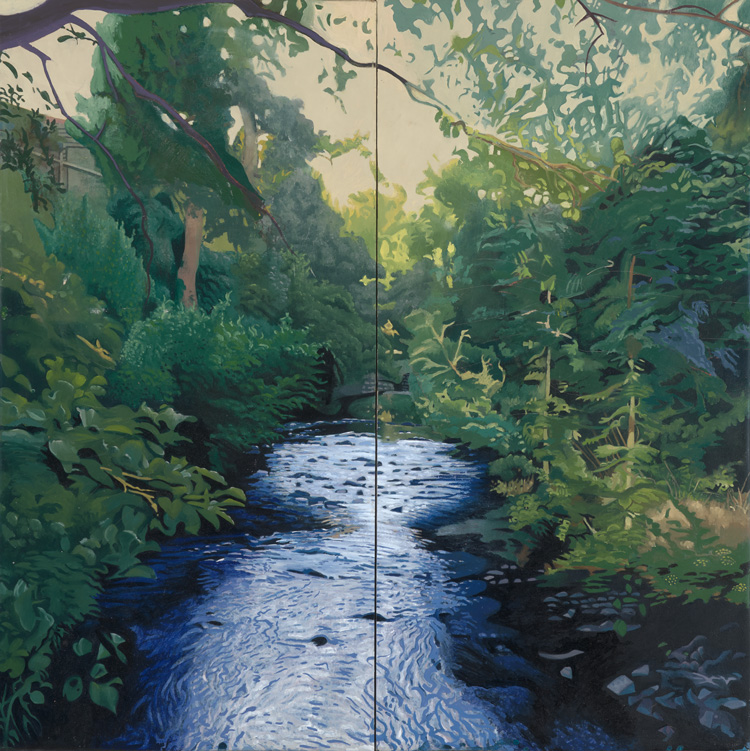 When A. E. Housman published ‘A Shropshire Lad’ in 1896, he was living in Highgate village on the outskirts of London, where sheep grazed the hills around Hampstead Heath and Highgate, reminding him of his youth in rural Worcestershire.

On his walks around the family home high in the hills above Bromsgrove he would have seen the changes of the seasons and the now famous ‘blue remembered hills’ in the distance, the Clee Hills, Bredon and the Malverns.

Robert Cunning’s paintings portray the beauty of the change of seasons and the wildflowers in the hay meadows that Housman loved so dearly.  There is still much to celebrate in the changing light of the high hills in spite of the climate crisis and the effects of industrialised farming.

Did Housman have a premonition that the world was rapidly changing?  His poems only became well known 20 years later at the outbreak of The Great War, when enlisted men and their families looked back with nostalgia to the peaceful rural England of pre-industrial times.

“Superficially the countryside appears unchanged but beneath the surface there has been a catastrophic loss of wildlife and wild places,” Robert Cunning says.  “The Shropshire landscape is still beautiful, the rivers have fish and invertebrates, there are insects and birds, but they have all sadly diminished in the 30 years that I have been living here.  125 years after the publication of ‘ A Shropshire Lad ‘ (1896), we are going through an ecological crisis.  These landscape paintings are both a celebration of nature and a recognition of change.”

Robert Cunning lived and taught in London for 20 years but now lives and works in Shropshire.  A common thread of his paintings is that they evoke a strong sense of place, whether it is the deep rural hills of South Shropshire and the Welsh Marches, or the inner cityscapes of London and New York.  His paintings observe the changing architectural spaces of our cities and the seasonal changes of the countryside.

5 April 2022: A Shropshire Lad in Highgate.  Lecture by Peter Parker, author of Housman Country: Into the Heart of England (2016).  Parker discusses why A Shropshire Lad became one of the most popular books of poetry ever published and how it has influenced English culture and notions of what ‘England” means both here and abroad. Please book a seat here.