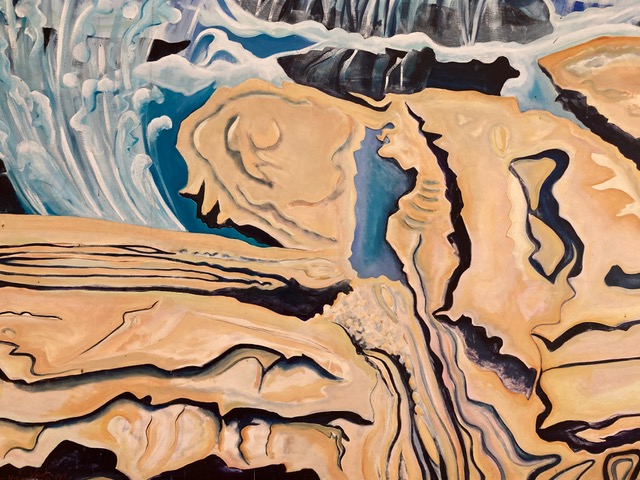 Interdisciplinary artist Elspeth Hamilton, who has also worked as an architect, glass artist, teacher, writer and environmental educator, presents an exhibition which spans over 40 years of work and focuses thematically on seascapes, riverscapes and portraits.

Her expressive paintings explore the language between figuration and abstraction, and are preoccupied with the tension Hamilton sees between ‘rough and smooth’, both in terms of the forces of nature, and our experience of life.  It was a preoccupation she first realised on the Pembrokeshire coast where she was fascinated by the stillness of a rock pool juxtaposed with the wild sea. On the coastline in Dominica, she depicts the effects of erosion on the dramatic cliffs. In Spain, she captures an approaching storm and in Cornwall the elemental drama where sea meets rugged cliffs. 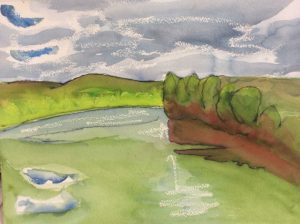 In another series she portrays the great rivers of the Thames and the Moselle.  Her trip up and down the Moselle at Trier provided 28 compositional sketches with colour notes that led to some of her favourite paintings.

In recent years she has had to deal with deteriorating eyesight which has in no way diminished her passion and commitment. As she says, she “paints not with her eyes alone”. Indeed, she showed characteristic courage and determination in painting the river views at Windsor and Eton despite suffering debilitating vision.

In her figurative pieces she is showing portraits as well as studies from a number of Old Masters.  She comments that “learning from painters that speak to you is a way of making friends that sustain you in rougher patches of life”.  Included is a portrait of the late scientist James Lovelock, whom she worked with to invent an allegorical portrait including imagery of his loves and interests.

Hamilton started her professional career as an architect, executing projects as well as teaching design and lecturing on energy in the environment and climate change. Interdisciplinary thinking has been a prime concern in all aspects of her work and she has created a landform education project in Cornwall developed from a competition entry for Parc de la Villette in Paris.  A play written in 2021/2 integrates issues of housing, climate, prison policy, and social inequality into a positive outcome.  Her book ‘Humpty and the Cuckoo – Aesthetics of the Environment’ is published in November 2022.

Hamilton first showed paintings in London 1994.  Twenty two environmentally themed solo shows have followed, at Highgate Gallery, Edinburgh, Salisbury Playhouse Theatre and Liverpool, and her work is held in private collections in UK and overseas.  She has been interviewed and reviewed in the national media including The Spectator, Architectural Design and Radio 4.