On a cold, drizzly Monday, 15 February 1971, Britain went decimal. Ten years in the planning, it required careful coordination between the Royal Mint, the British Government and its appointed overseer, the Decimal Currency Board. Tom Hockenhull discusses the major decisions that were made and the challenges faced in the build up to ‘D-Day’.

Tom Hockenhull is curator of medals and modern money at the British Museum. His latest book, Making Change: The Decimalisation of Britain’s Currency is out now. 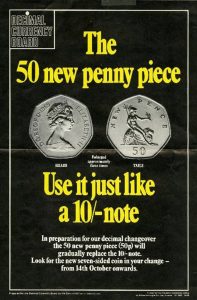 Please book by 1pm on the day of the lecture.
Free to members / non-members £5 or book the season (see the separate listing).