Lady in a Veil 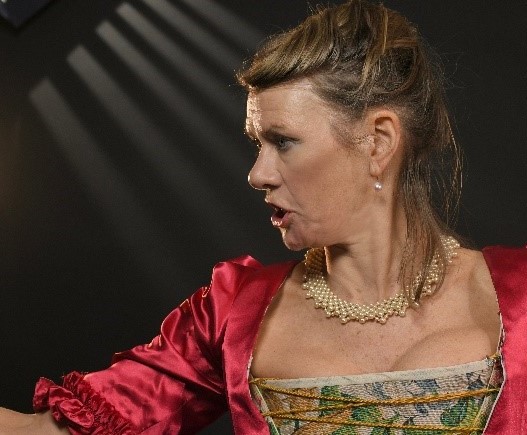 Lady in a Veil is a solo show, written and performed by Georgina Lock in the character of Lady Mary Wortley Montagu (1689-1762).

“Fascinating portrayal of a woman of substance brought to life with real skill; both script and performance.” Audience-member, Bromley House Library.

Lady Mary, an East Midlander, was the most extraordinary woman of her age: a female wit and inveterate letter writer who introduced smallpox inoculation from Turkey to Europe and saved thousands of lives.

In 1717, aged 27, this fascinating woman set out across Europe for Turkey as the British Ambassador’s wife. In Constantinople, she visited harems and trialled the Turkish method of smallpox inoculation on her only son before championing it in England. Aged 52, she is travelling again, seeking emotional satisfaction… and Count Francesco Algarotti.

Join a Zoom audience for a performance by Georgina Lock. Dr Georgina Lock combines writing, acting and directing with research into the eighteenth century – particularly its women. Lady in the Veil builds on her chapter “Performance and Performing in Lady Mary’s letters from Istanbul” in Britain and the Muslim World (ed Gerald Maclean) and her blog “Lady Mary Wortley Montagu; Nottingham’s First Rebel Writer”.

The performance will last approximately 45-minute and is followed by a short Question and Answer session.

For more about Lady Mary and Georgina visit her website.