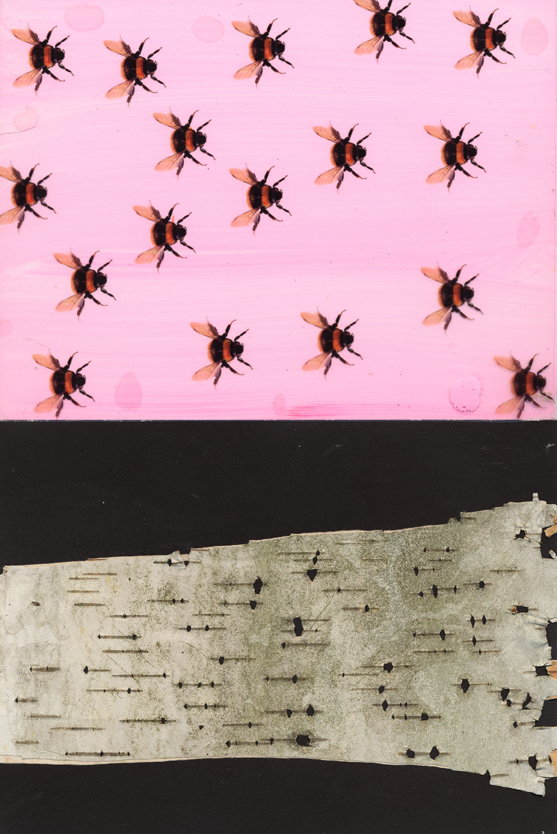 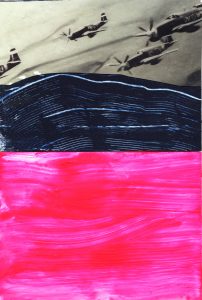 These vigorous, colourful works are joyful, yet a darkly sinister undertone lingers beneath the playful surface marks, creating strange  landscapes where cloned sheep, menacing bees and warplanes are juxtaposed with abstract shapes of brilliant colour.  Our perception of space – as well as our relationship with nature – is called into question.

The majority of the works on show are made of two parts that meet forming an horizon, which in turn becomes a metaphor for ambition, for the future, for what lies beyond…a great circle of the celestial sphere, a limit without limits.  “The earth meets the sky over the hill, I was told by a sparrow with a bump on its head” (Ivor Cutler).

Presenting these new works in a virtual sphere has paradoxically allowed the inclusion of pieces that would otherwise have been awkward to hang in a traditional environment, articulating a wider hinterland.

Tom Scase is a Suffolk-born artist who is based in Highgate, North London.  He has exhibited widely and is a member of the London Group of Artists.  There will also be an opportunity to see Tom’s physical show at the Highgate Gallery at Highgate Literary and Scientific Institution, 11 South Grove London N6 6BS from 14-28 January 2021.

Debate: The BBC is a national treasure that we all need to pay for